These past couple of weeks I’ve been tinkering with AWS ECS Fargate and after losing some time tackling different approaches I thought it might be useful to write down what I ended up building.

My goal was trying to build an AWS ECS Fargate cluster and deploy apps on it using Azure DevOps Pipelines and I had 3 clear objectives I wanted to achieve.

My first approach was trying to emulate this post on the official AWS blog: https://aws.amazon.com/es/blogs/devops/deploying-a-asp-net-core-web-application-to-amazon-ecs-using-an-azure-devops-pipeline, but I didn’t like that approach. Let me explain a little bit my pain points with this approach:

To deploy a container into ECS you need to create a “ECS Task Definition”.
An ECS Task Definition contains among many other attributes the Uri and tag of the image you want to ran, so if you put something like ‘uri:latest’ as the value of the attribute you don’t need to create a new Task Definition everytime you deploy a new version of the same container because it will always pick the image with the ‘latest’ tag.
That’s a neat trick, but I really like to avoid deployments with stable tags like the ‘latest’ tag, because those tags continue to receive updates and can introduce unwanted inconsistencies. I prefer to use unique tags for every deployment like the container build Id.

2- The post only explains how to create a pipeline that updates and already running container, but how should I deploy my application the first time? How should I create the ECS Task Definition and the ECS Service the first time? Those questions are linked with one of my biggest pain points when working with ECS:

And why is it a problem? Because what I like to do is to create the application infrastructure first and then deploy the app. Both things can be deployed using the same pipeline but I don’t like to do it at the same time.
I like to create the infrastructure first and then deploy the application, and the fact that you need and existing image to create an ECS Task Definition, forces me to do something along these lines:

So in my mind it seems that I’m intermingling the creation of the infrastructure with the application CI/CD. And I don’t like it…

In my perfect world I would rather do something like this:

And after all the infrastructure required to run my application is created then deploy the application onto that infrastructure. And that’s exactly what I end up building, I’m sure that some people might not agree with that approach and find the other one completely fine, but that’s not my case…

At the end I built 3 pipelines:

1. Create and deploy a “dummy” application

So that’s the first pipeline:

It’s a very simple pipeline: build the container image and push it into an ECR repository.

And why is it going to run just once? Because I’m using that image as a stepping stone so I can create all my infrastructure without needing to reference a real container image.
Once the image is pushed into a generic ECR repository I can reuse it for all the applications that I decide to spun up inside my ECS cluster.

So that’s the first pipeline you are going to ran and you can ran it whenever you want as long as it is the first one.

As I said it’s a very simple pipeline, take a look:

2. Create and deploy the infrastructure needed on AWS

I decided to use AWS CDK to create all the AWS related infrastructure.
I’m not going to show the CDK app that I have developed because it’s a pretty straightforward one and it will be too much code to paste it in this post, the only thing worth mentioning is that the ECS Task Definition is created referencing the “dummy” image that I have built in the previous step.

The pipeline is quite simple as I’m just executing the CDK app. 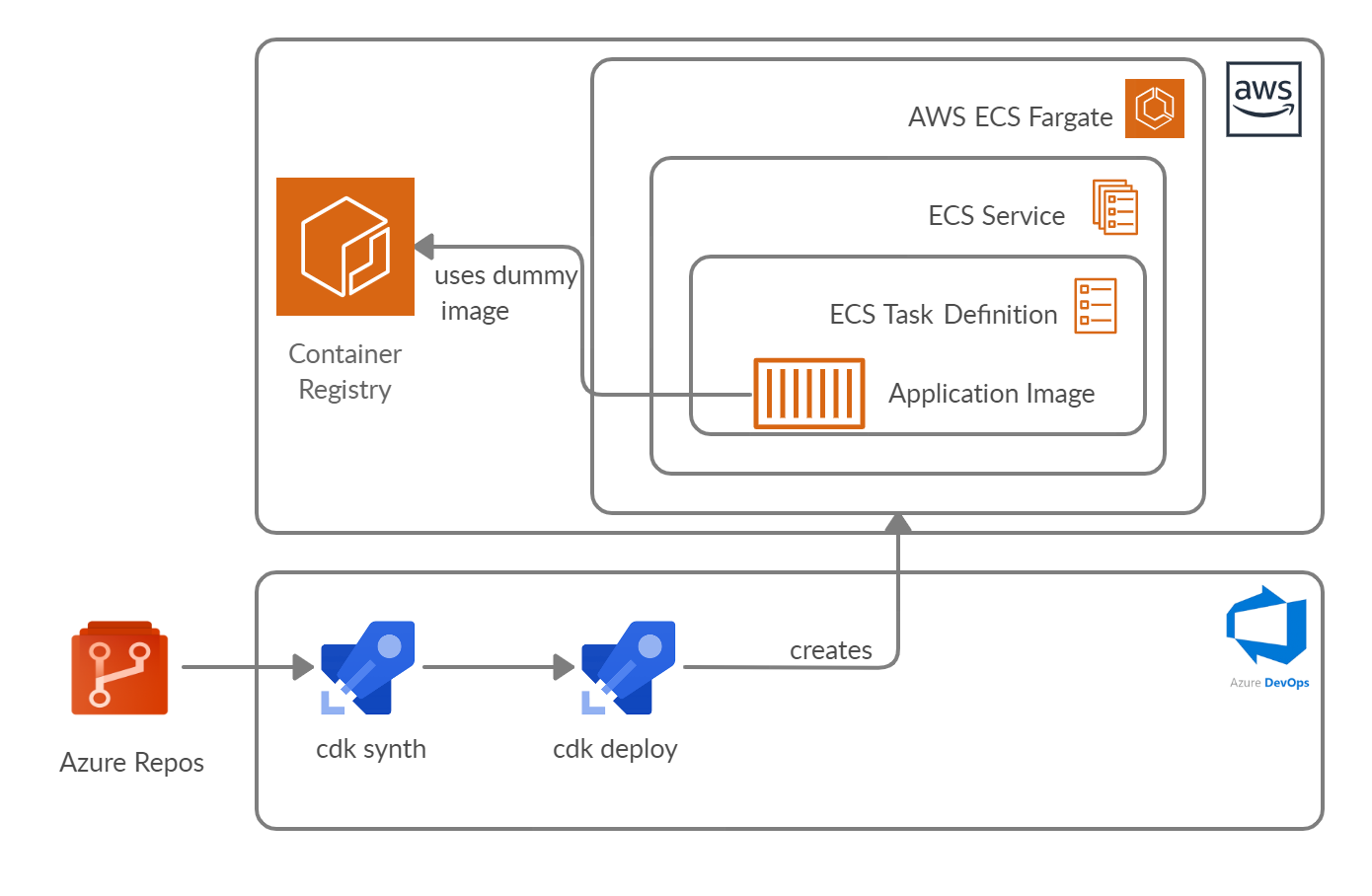 I’m not going to show you the pipeline to deploy a CDK app because I already talked about it in a previous post.
If you want to know how to build an Azure DevOps pipeline that deploys an AWS CDK app you can read my previous post: https://www.mytechramblings.com/posts/provisioning-aws-resources-using-cdk-azure-devops/

The last pipeline is the one in charge of building and deploying the application.

The tricky part of this pipeline is when we want to create a new revision of the ECS Task Definition and update the ECS Service to reference the new definition. There are 2 paths we can follow: We can do it everything by ourselves via scripting and the result will be something like this:

Or we can use the Fargate CLI : https://github.com/awslabs/fargatecli

The fargate CLI is an command-line interface that allows me to streamline the deployment of containers to an existing AWS Fargate cluster.
With the Fargate CLI you can update the ECS Task Definition and the ECS Service simply by running the following command:

For simplicity I decided to ran with the Fargate CLI instead of the bash script, I placed the CLI on a separate Git repository.
This pipeline sounds a little more complex, so let me show the end result:

As I stated before I ended up building 3 different pipelines instead of a single pipeline that does everything.
The first pipeline is circumstancial, it creates the “dummy application” and runs just once.
The other 2 pipelines are the important ones: the first one deploys the infrastructure using CDK and the second one deploys the app.

In my case I’m not going to do it, for me it’s more comfortable having 2 pipelines rathen than a single one and that’s because those pipelines are probably going to be maintained by different people.