Getting started with AWS Distro for OpenTelemetry and distributed tracing using .NET. Part 1: Setting up the AWS OTEL Collector

A few months ago I wrote a post about how to start using OpenTelemetry with .NET, if you’re interested you can read more about it here.
In that post I talked a little bit about the main concepts around OpenTelemetry and also I showed how to instrument a few .NET apps with the .NET OpenTelemetry client.

In this post I’m going to get back to OpenTelemetry and .NET, but this time I’m planning to focus on trying out the AWS Distro for OpenTelemetry.

I’m not going to repeat myself talking about what’s an Activity or a Span or a Propagator, you can go read my other post.
I’m sure there’s going to be some overlap with my previous post, but I’ll try it to keep it to a minimum.

In this 2 part-series post I’m planning to be talking about the following topics:

But first of all:

With the AWS Distro for OpenTelemetry you can instrument your application to send metrics and traces to multiple AWS solutions such as AWS CloudWatch, Amazon Managed Service for Prometheus, AWS X-Ray or Amazon OpenSearch Service.

It can also collect metadata from your AWS resources and managed services, so you can correlate application data with infrastructure data.

The main component of the AWS Distro for OpenTelemetry is the AWS OpenTelemetry Collector which is capable of ingesting metrics and traces sent by the apps, process them and export them into multiple AWS solutions.

The Collector has two different deployment strategies: either running as an agent alongside a service, or as a remote application.
In general, using both is recommended: the agent would be deployed with your service and run as a sidecar; meanwhile, the remote app would be deployed separately, as its own application running in a container or virtual machine. 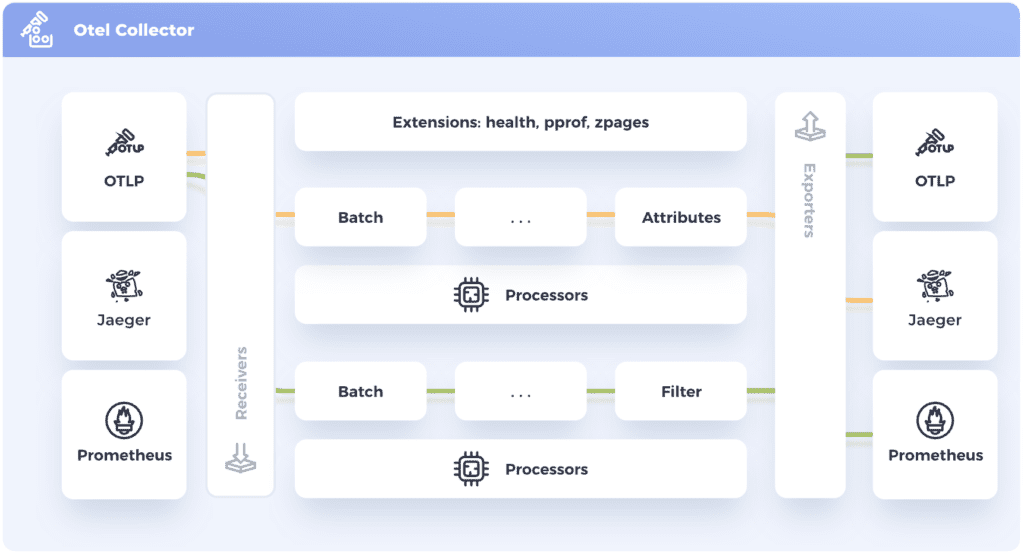 Apart from traces, the AWS OTEL Collector is capable of ingesting metrics and send them to AWS Cloudwatch Metrics, but in this post I’ll be focusing solely on tracing data.

It’s worth mentioning that there are 2 Collectors: the “official” OpenTelemetry Collector and the AWS OpenTelemtry Collector.

AWS instead of using directly the “official” OpenTelemetry Collector has decided to implement their own Collector.

The AWS OTEL Collector is built on top of the “official” OpenTelemetry Collector but they have added AWS-specific exporters to send data to AWS services including AWS X-Ray, Amazon CloudWatch or Amazon Managed Service for Prometheus.

If you want to configure it, you need to know that the configuration contains three main components:

To build the demo we are going need the following receivers, exporters and processors:

If you’re curious about the logging exporter, here’s an example of how the output looks like: 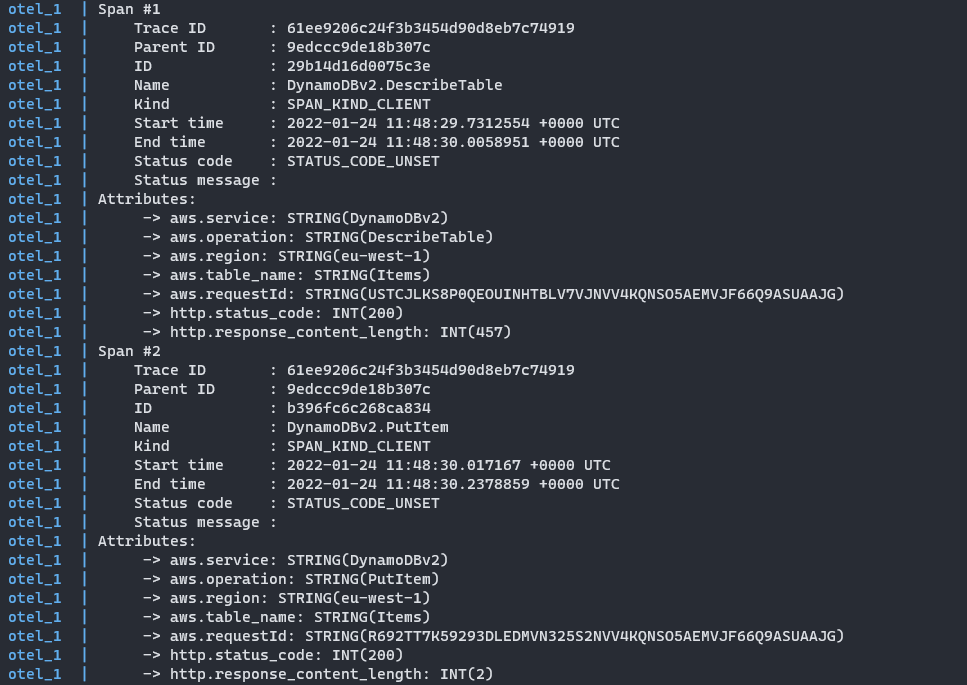 And here’s how we’re going to configure the Collector:

I’ll be running the Collector on my local machine using docker-compose, that requires that you specify a valid AWS_ACCESS_KEY and AWS_SECRET_ACCESS_KEY.

Here’s a snippet from the docker-compose file where the Collector is configured:

The user requires at least permissions for AWS CloudWatch Logs for metric publishing, and for AWS X-Ray for sending traces.

So, I’ll be using this IAM policy for the Collector:

After setting up the AWS OTEL Collector, I’m ready to begin building the apps, but it won’t be right now.
See you in part 2

Read other posts
← Getting started with AWS Distro for OpenTelemetry and distributed tracing using .NET. Part 2: Building the demo Building an Async HTTP Api with Azure Durable Functions and Python →