How to deploy a SignalR Core application to AWS

In this first section I want to talk about AWS services that controls and balances network traffic and how to use them with SignalR Core.

The services we’re going to review are the following ones:

There are 2 things worth mentioning when setting up an AWS ALB: WebSockets and Sticky Sessions.

The ALB allows us to forward the traffic to an application by leveraging a couple of resources:

The Target Group defines where to send the traffic. We can configure the port and protocol of the traffic that is forwarded, as well as a health check, so that the load balancer doesn’t send traffic to a dead service.

The Listener defines how the load balancer gets its traffic from outside. That’s where you define the port and the protocol to reach the load balancer, and what is the default behavior for the traffic hitting that listener.

Amazon ALB Listeners only offer HTTP or HTTPS protocol, but the good news is that WebSocket initially contacts the server with HTTP if you use ws:// or HTTPS if you use wss://.

Your server will then reply with 101 Switching Protocols, telling the client to upgrade to a WebSocket connection and from this point forward the communication will be via WebSocket.

SignalR uses the WebSocket transport where available and falls back to older transports where necessary.

You don’t need to do any extra configuration on the ALB to start using WebSockets, but it’s good to know how it works.

SignalR requires that all HTTP requests for a specific connection be handled by the same instance. When a SignalR app is running behind a load balancer with multiple instances of the same service, sticky sessions must be used.

The only circumstances in which sticky sessions are not required are:

The next code snippet shows an example of a CDK app that creates an ALB Target Group with sticky sesion enabled.

In AWS API Gateway you can create a WebSocket API, which can be use as a stateful frontend for an AWS service or an HTTP endpoint.
The WebSocket API invokes your backend based on the content of the messages it receives from client apps.

I was unable to make a SignalR Core app work with AWS WebSocket Api Gateway.

The problem lies with how the API Gateway handles the connections and route messages. The API Gateway uses three predefined routes to communicate with the app: $connect, $disconnect, and $default.

This is a very specific way to handle connections and route messages and does not sit well with SignalR. In fact, it seems that integrating a SignalR Core app with an AWS WebSocket Api Gateway is not possible.

If someone knows a way to do it, contact me.

A SignalR application needs to keep track of ALL connected clients, which creates a problem in an environment like AWS where applications can scale out automatically. 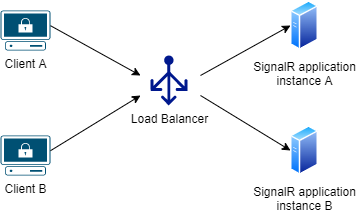 In this section will review a few AWS services that can be used as a SignalR backplane, those services are the following ones:

Amazon ElastiCache is a fully managed, in-memory caching service. You can use ElastiCache for caching or as a primary data store for use cases that don’t require durability like session stores, gaming leaderboards, streaming, and analytics. ElastiCache is compatible with Redis and Memcached.

Using Redis as a backplane is the recommended way for scaling-out SignalR Core apps hosted on AWS, and ElastiCache is probably the best fit.

There is no extra configuration required on ElastiCache to make it work as a SignalR backplane.

If you’re using a single ElastiCache server for multiple SignalR apps, use a different channel prefix for each app. Like this:

If you don’t assign different prefixes, a message sent from one app to all of its own clients will go to all clients of all apps that use the Redis server as a backplane.

Amazon MemoryDB for Redis is a another Redis-compatible, in-memory database service that is based in part on the open source Redis platform.

What is the difference between MemoryDb or ElasticCache? Which one should I use?

The difference between Amazon ElastiCache and MemoryDB is that the former is intended as an in-memory cache that works alongside a primary database, whereas MemoryDB is a full database service in itself that is designed to operate on its own.

We could say that MemoryDB for Redis is AWS’s answer to Redis Enterprise and it exists to try to fill the gap for customers seeking a durable counterpart to ElastiCache. Consider Amazon MemoryDB, in essence, a premium tier of ElastiCache for Redis.

Both MemoryDb and ElastiCache supports the Redis pub/sub feature, so you can use both services as a SignalR backplane.

I tend to prefer ElastiCache over MemoryDb, for two reasons:

There is no extra configuration required on MemoryDb to make it work as a SignalR backplane.

Go read the previous section where I talked about how to configure your application with a ElastiCache as a backplane, because the use is exactly the same for both services.

The only thing worth mentioning is that when creating a MemoryDb Cluster you have to set up authentication, meanwhile authentication on ElastiCache is optional, which means that when configuring your SignalR app to use MemoryDb as a backplane you’ll need to specify the user and password, like this:

Amazon RDS for SQL Server makes it easy to set up, operate, and scale SQL Servers in the cloud.

Using SQL Server as a backplane is not the right solution for applications with a need for very high throughput, or very high degrees of scale-out. Consider to use one of the Redis services (ElasticCache or MemoryDb) for such cases.

There is no official Microsoft implementation to use SQL Server as a backplane, if you want to use it you’ll need to use the IntelliTect.AspNetCore.SignalR.SqlServer NuGet package.
More info about this package here:

There is no extra configuration required on RDS for SQL Server to make it work as a SignalR backplane.

Azure SignalR Service is a managed SignalR backplane, it eliminates the need of having to manage your own Redis/SQL Server instance.

This services has a few advantages over the other backplane alternatives:

Another nice feature this service provides is the “Live Trace Tool”, it is is a single web application that exposes SignalR traces that went through the service.
The traces includes: connection connected/disconnected events and message received/left events.

Probably you’re asking yourself why I’m talking about an Azure service, that’s because you can use the Azure SignalR Service as a backplane with a SignalR Core app hosted in AWS as long as both: application and service are visible.

The optimal solution when choosing a backplane service is having the backplane as close as possible to the app, having the backplane on another cloud provider seems far from ideal, so if you want to use it be mindful about network latency, throughput and the amount of data that will be transferred outside of AWS.

The AddAzureSignalR() method can be used without passing the “connection string” parameter, in this case it tries to use the default configuration key: Azure:SignalR:ConnectionString.

In the last section I want to talk about a few AWS services that can be used to deploy your SignalR Core application, those services are the following ones:

Just build the container like any other .NET6 application and deploy it. No extra steps or configuration required here.

Just remember to enable sticky sessions on the ALB Target Group and to setup a proper backplane.

The part where you deploy the SignalR app into the server is business as usual, it’s like deploying any kind of .NET6 application. On the other hand setting up the web server tends to be more problematic, so let’s talk a little bit about it.

Using a Windows EC2 with IIS as WebServer

Using a Linux EC2 with Apache as WebServer

If you set the VirtualHost configuration to use http instead of ws, like this:

It will use SSE (Server Sent Events) instead of WebSockets.

Using a Linux EC2 with NGINX as WebServer

Just build the container like any other .NET6 application and deploy it into the EKS cluster. No extra steps or configuration required here.

The tricky part here is configuring the Ingress Controller properly.

For our SignalR app we need to create an Ingress resource.

Here’s a quick explanation about how the AWS Load Balancer Controller creates and configures an ALB for us.

I’m not going into further detail about how the AWS Load Balancer Controller works, because this is out of scope for this post, for a SignalR Core app the only thing you’ll need to know is that you need to add the alb.ingress.kubernetes.io/target-group-attributes metadata when the Ingress resource is created.

Previously on the “Network” section, I talked about how you need to enable “sticky sessions” for a SignalR Core app to work properly with an ALB. Now, we’re going to use the alb.ingress.kubernetes.io/target-group-attributes metadata annotation to tell the AWS ALB Controller that when he creates the Target Group it needs to enable “sticky session”.

For better understanding of how to setup the Ingress Resource, here’s an example of a Kubernetes manifest that contains an Ingress, a Service and a Deployment resource.

I’m aware that there are other ways to consume a SignalR app that has been deployed into EKS, for example using a NGINX Ingress Controller, but I’m not going to talk about them in this section because I lack knowledge about them.

On my GitHub account you can find a repository that contains a quick example about how to deploy a SignalR Core App on AWS.

The source code can be found here:

The repository contains a /cdk folder, where you can find a CDK app, that creates the following infrastructure on AWS: 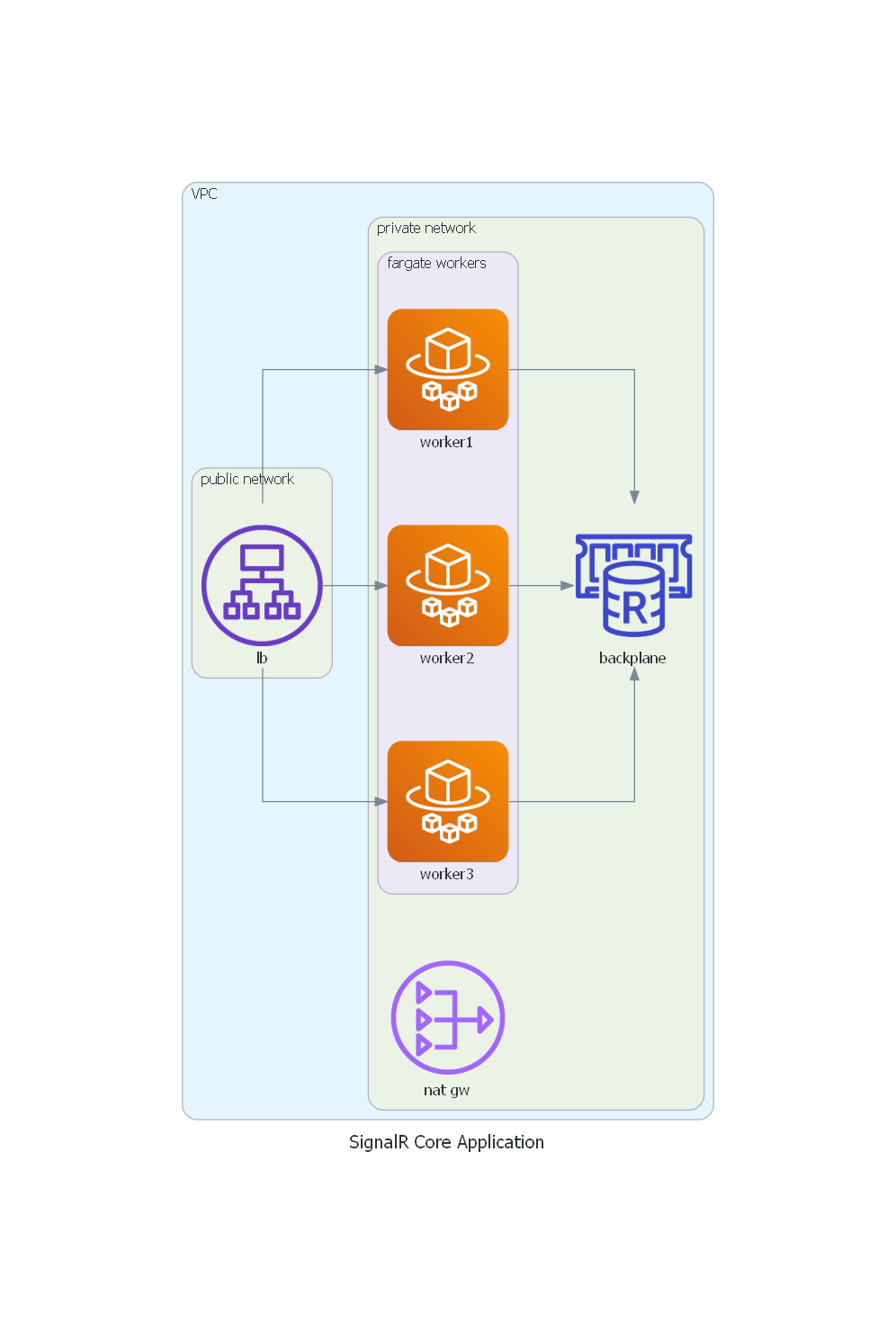